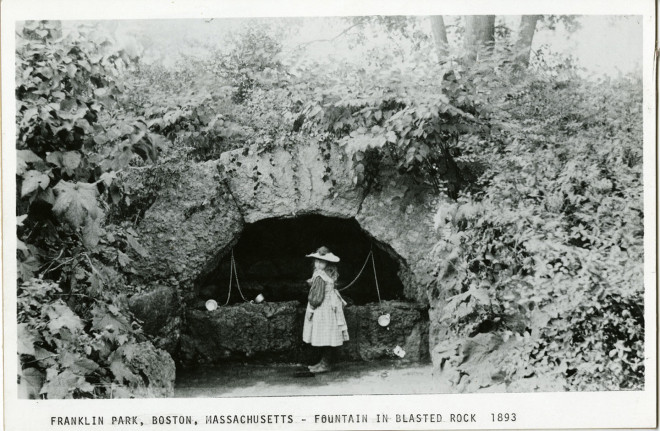 My “research” into Boston’s Franklin Park  is pretty haphazard. Sometimes I find an interesting part of the Park, maybe a ruin or a random staircase, and I look into it. Sometimes I find an old picture or postcard online and I try to find where the picture was made. Sometimes I accidentally make connections… like I did this week.

Everything started with my friend John Louis, who is a student where I teach. He had read some of my rants and was interested in the Bear Cages. He was helping out on the crew of my short sci-fi film, so after filming we agreed to get some lunch and walk over the Bear Cages so he could see them. Of course, being the nerd I am, I gave the poor kid an earful about the history of the Park.

We had a great walk, saw the Overlook and the Bear Cages, then wandered toward the Zoo so he could see the statues. On the way, along the edge of the Playstead near the Zoo entrance, I saw something that made me stop. Something awesome.

In my internet wanderings I have frequently come across a photo of a young girl in the Park, drinking from a fountain. The image on the Olmsted Archives Flickr is labeled “Fountain In Blasted Rock – 1893.” I love this photo because the little girl seems so happy. The tin cups on strings are so quaint and a wonderful reminder of a long-lost time when tuberculosis took many lives in Boston. (Hey, my nostalgia is tempered by an honest fear of disease!)

In all my wanderings around the Park, I’d never found a spot that seemed like it could be this fountain. The “blasted rock” description implies that it should be in the rockier parts of the Park… Hagbourne Hill or the Wilderness. I would never have expected to find it on the edge of a baseball field in the Playstead, near the Zoo entrance. 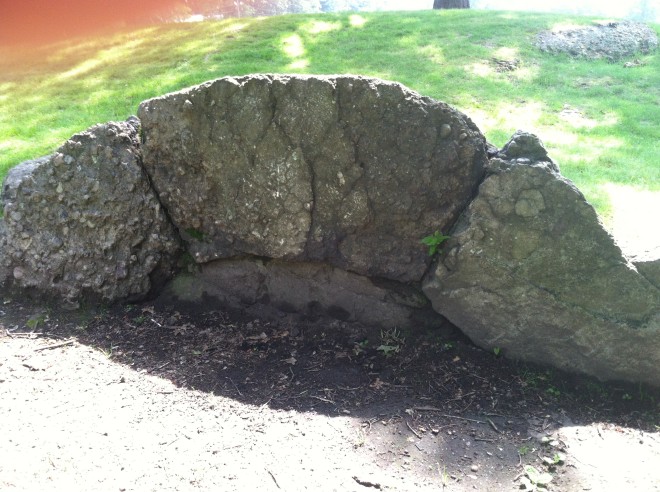 This is the photo I took with my phone of the top of the fountain. Behind it is a small rocky knoll, and beyond that is the baseball field. Nothing about the placement of this fountain makes sense! But I’m sure it is the right structure, because if you look closely at the 1893 photo and my picture, you’ll notice that the cracks in the keystone rock are the same. That’s all I have to compare, and all I have to say they are the same structure, but I think I’m right.

Which really leaves me with more questions than answers. Why was this fountain buried? When? Where did the water for this fountain come from? Where does it go now? Who was the little girl? Did she get to visit some raccoons?

Lots of people walk through Franklin Park every day. Many people visit  the Zoo every week. I doubt any of them appreciate this half-buried fountain. But if they were in the Park last week, they might have been lucky enough to see this nerd jumping up-and-down atop some random rocks.