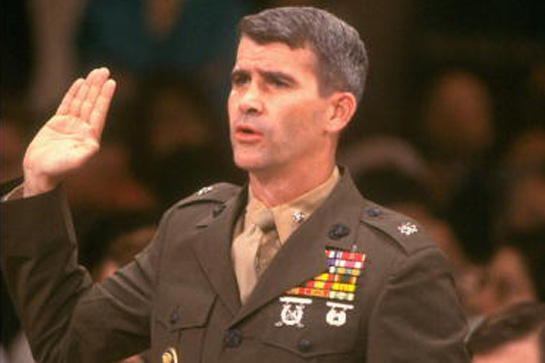 When I was a kid, I liked to skip school. I’m about to turn 37 and I can admit to this. But here’s the thing: I didn’t want to skip school to do drugs or vandalize churches… nope, I wanted to read books and watch tv.

Around Christmas of 1987 my parents split, and I found myself spending a lot of time at home alone. My sister went to a caretaker but I was too old, so my afternoons and evenings were spent watching tv and reading comic books. As spring became summer, I found myself caught up in the ongoing political drama on television. Without cable tv (which would come to my street 2 years later) and long before the internet, the greatest show on earth was the Oliver North trial.

All through the summer of 1988 I watched as things grew crazy, heated, messy and ugly. I was 12 years old and this was my introduction to politics. Having already become disillusioned with Reagan and the Cold War after the Challenger explosion, I found my time alone in our huge, quiet farmhouse to be full of fear and questions. And there, every day on the teevee, was Oliver North. 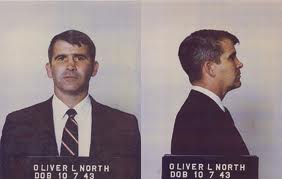 I have no opinion on the Iran-Contra affair. Even watching the news and trials every day in my youth I still don’t get it. But I do know that without Ollie North I would not be so invested in politics. Without Ollie North I would not have seen the ugly face of the Reagan years… even if I didn’t understand I knew that wrongs were committed in my name.

Reagan never sat well with me. Even at the age of 5 I recall thinking he was evil, running away from the tv when he appeared. In school, where I was a very compliant doctrinaire student who agreed to worship any “leader” the teacher presented, I always felt Reagan was corrupt. It was an instinct, the way a child knows predator from friend, but I have always felt it strongly in my gut when the “Gipper” appeared on screen. So Ollie North’s trial was just the final, public version of what I had always felt.

Why does this matter?

Well, as you’ve probably noticed I tend to write about how history and the present collide. Usually this is about a place, a comic book, a movie… whatever. But with Ollie North I feel like we can learn something else. We can learn to actually punish our failures.

John O. Brennan, nominated by Pres. Obama as Director of the CIA

John Brennan has been nominated by President Obama, and will probably be confirmed, as head of the CIA.

Now, I know that Oliver North — perpetrator of the Iran-Contra affair — eventually got a radio show once his ignominy had faded. John Brennan was Deputy Director of the CIA under the Bush administration torture regime. Now it appears that Brennan won’t even be required to wait and let his ignominy fade. He’ll be rewarded instead.

Who is John Brennan? John Brennan approved the “enhanced interrogation” of people that included water-boarding and other forms of torture.

Yes, I know we’ve all moved on. Electing Barack Obama means we don’t have to talk about the ugly Bush years. Obama banned torture so we’re all good now. No need to punish the people who thought it was OK to torture in the name of the United States. To torture in my name. In your name.

I may support Obama’s efforts to fix our domestic problems, especially health care and immigration, but I’ve always been embarrassed that he keeps a torturer so close as a Special Advisor, and I cannot stand that he wants the same torturer to be head of the CIA. If this were happening in another country and we were watching from the outside, wouldn’t everyone be outraged! Another torture apologist as head of the secret agency in charge of drone bombings and “black sites.” 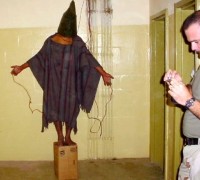 One of the torture photos from Abu Ghraib. This is not from Zero Dark Thirty.

Zero Dark Thirty may be brutal in its depictions of torture (and controversial because of its implications of the outcome) but I truly believe that the movie is tame compared to real life. Torture is awful, the last resort of an amoral society. Torture is a word we reserve for the Spanish Inquisition and the Soviet NKVD. Torture is not a word I want to ever be associated with a government acting in my name.

John Brennan sat as Deputy Director and approved the CIA becoming the NKVD. Now Obama wants him as Director.

I grew up watching the trial of Oliver North, who overstepped the moral boundaries of the American war machine by selling weapons to our enemies to fund our allies. North’s villainy seems almost quaint in the post-9/11 world. John Brennan has led the agency that crossed into the moral territory we only reserve for true villains — Vlad the Impaler and Caligula — yet will get a hearing in the U.S. Senate to be Director of the CIA. Yay for left-wing liberal socialist Obama.

If this is what passes for the left-wing of American politics I may need to turn in my membership card.

The U.S. has been in some state of war since 1941. Until we unravel the political-economic structure Eisenhower labelled “the military-industrial complex” and make decisions based on what is best for the world — y’know, by being a leader and acting with the highest moral courage — then we will continue to elevate torturers because they are the ones who best represent our political will on the international stage.

Remember, these people are acting in your name.