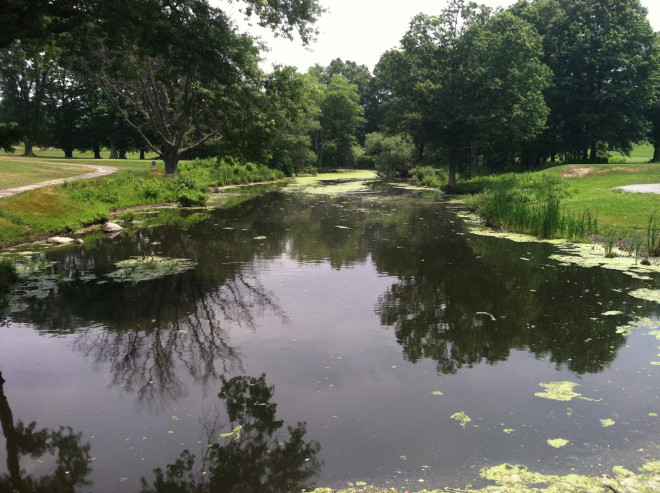 Contemporary view of the eastern portion of Scarboro Pond, viewed from the foot bridge.

One of the most memorable features of Franklin Park is Scarboro Pond on the southwestern corner of the Park. Two stone bridges cross it, making for picturesque views. There are herons and geese and ducks on the little islands, and turtles sun themselves on the rocks. It’s hard to believe that the pond is man-made, and that it wasn’t even part of the original Park plan.

Looking at the General Plan of Franklin Park, it’s obvious that there is no body of water near Scarboro Hill and that the Nazingdale fields are open and dry. However, the Franklin Park Coalition reports “Olmsted changed his original park designs after the public demanded a waterway in the park” and by the time the Revised Plan of Franklin Park was published a few years later, it contains plans for Scarboro Pond.

From the 1893 Engineering and Construction Report for Franklin Park. Via Boston Public Library.

What is interesting to me, though, about the Revised Plan is that it shows the pond extending well past its current size, with a narrow portion running the valley of Nazingdale before meeting two ponds at the edge of Abbotswood. The Annual Engineering and Construction Report from 1893 describe the process of creating the water feature.

Later reports are very clear that there were ponds near Abbotswood, and looking around the Jamaica Plain Historical Society website I found a map from 1899 that shows them in a little more detail, and gives them names… well, identities really. One is labeled “Toy Boating” and the other “Lily Pond.” The map also shows the narrow stretch of water that connected these two small ponds with the larger portion that remains today. It’s interesting to compare the two maps and see how much was cut out of the planned Pond. 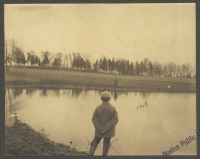 A photo of boys playing near “Sargent’s Pond” via Boston Public Library’s Flickr. 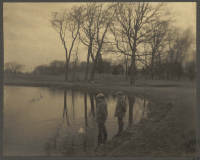 A photo of boys playing near “Sargent’s Pond” via Boston Public Library’s Flickr.

I’ve looked around for pictures of these ponds, and have only managed to find a few possible images on the Boston Public Library’s Flickr stream. There are two similar shots of young boys playing with a toy boat in a small pond. The caption says the pictures are from 1900 at “Sargent’s Pond, now filled up” which is a little confusing. Sargent’s field, and Sargent’s Follies, are inside the Zoo and pretty far away from the ponds in Nazingdale. Do these photos show other ponds? I doubt it, since no map or plan I’ve seen shows any ponds inside the Zoo in the Sargent’s Field area (there is a pond by the Bird’s World Exhibition) and the 1899 map says the larger pond is for “Toy Boating” which is exactly what these kids are up to.

Postcard view of a “Duck Pond” in Franklin Park. Via BPL’s Flickr.

Which is really awesome to me, now that I think about it. What a great way to spend a day, sitting alongside a small pond with a friend and watching your little boat cross the water on a gust of wind! The photographer is unnamed, but I suspect it was a parent out with the kids on what appears to be an autumn or winter day, escaping the smoky city.

Postcard view of a small pond in Franklin Park. Via BPL’s Flickr.

There are also two postcard views that I suspect show this extension of Scarboro Pond. The first shows two women and two young girls on the grass along a narrow waterway in the Park. My guess is that this card shows the stretch of the  pond that ran in the narrow valley of Nazingdale, which is now largely filled in by the golf course. The other photo shows kids playing along the edge of a small pond that is bordered by trees, and is very clearly different than the pond the boys are near with their toy boats. My guess is that this card shows the Lily Pond.

A map of Franklin Park from 1914 showing Scarboro Pond without the extension. Via JPHS.

The Construction Reports occasionally mention that the Nazingdale portions of the watercourse were not easy to maintain. Apparently the water levels in the Park fluctuated, and left portions of the pond and concourse muddy and ugly, and the Olmsted’s could not abide ugliness. By 1902 there are mentions of draining and filling the portion of the pond that extended into Nazingdale, truncating Scarboro Pond to its contemporary size, and filling in the smaller ponds by Abbotswood for the golf course. By 1903 or 1904 they were all gone, according to the records, and there is no mention of drainage or any work at all in any report after 1910. The 1914 map of the Park shows Scarboro Pond in its current shape, with no reference to any ponds in Nazingdale.

I had thought this part of the Park completely gone, until this summer when I was jogging past the Healing Fountain at the edge of Abbotswood, and I noticed a patch of cattails growing in a small swampy spot. I hadn’t really noticed this area before, since it was not all that interesting in any way, but the cattails caught my eye because they indicated water, more than just some muddy spots left by rain. Cattails meant longstanding water, maybe not deep but always present. Cattails meant that the Lily Pond was still there!

Abbotswood viewed from the path in 2013. The cattails at the base of the hill mark the spot of the Lily Pond.

Yesterday I made my way over there to see what I could find. Since the Lily Pond borders the golf course I had to be careful to stay in the trees or along the non-golf side of the swampy area, but I did find a few things that were interesting. Most importantly, the shape of the depression in the ground closely matches both the map and the postcard view of the Lily Pond posted above. There also appears to be a small portion of retaining wall left intact — although this is partially buried under dirt from winter snow piles that are plowed nearby. (I assume the Park management considers this a good area to dump snow because of the excellent drainage put in during the 1903-4 period described above.) 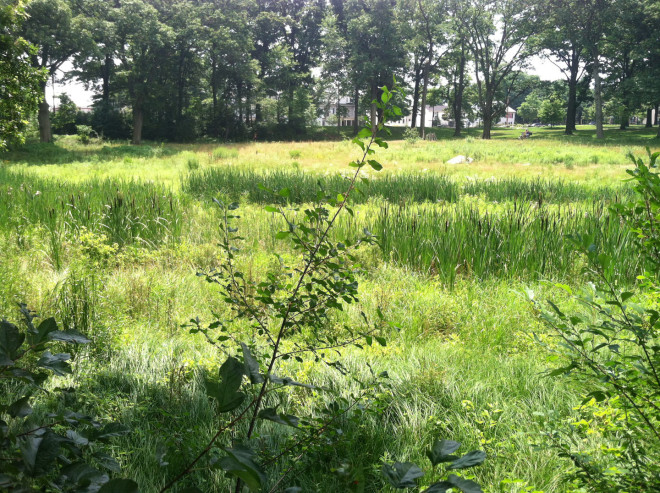 Looking down into the Lily Pond from the golf course.

Climbing up to the top of the hill in Abbotswood and walking near the golf clubhouse, I was able to look down on Nazingdale. The golf course covers the ground now, and it’s obvious that much of the valley has been filled. In fact, I watched the Park crews filling a portion of it this spring to fix a muddy spot on the golf course. However, the depression where the Lily Pond once sat is still visible, if you know what you’re looking for.

Nazingdale as viewed from atop the hill in Abbotswood.

After a morning of climbing through the woods and looking for muddy patches, I was quite proud of having found another little bit of lost Franklin Park history. Like the Overlook and the Bear Cages, the Raccoon Cage and the Lover’s Leap, this Lily Pond is a piece of the Park history that is there to find if you want. For me, standing on that spot and watching the world of 2013 move by unaware of this little spot where kids played with boats and mothers let their daughters feed the ducks, that was exciting. It was like seeing through time, from my life backward into theirs, the ghosts of moments of joy that were drained and buried in 1905 come back to us and haunt us now. Their stories are whispered by the cattails and we can walk by or we can sit and listen.

Looking across the golf course at the current location of Scarboro Pond. In the distance is the foot bridge that crosses the Pond.

Using the tree-line in the background, I was able to line up the two photos of the boys at the “Toy Boating” pond. The result doesn’t show any landmarks, but it does give a sense of the size of the pond. It was pretty small! 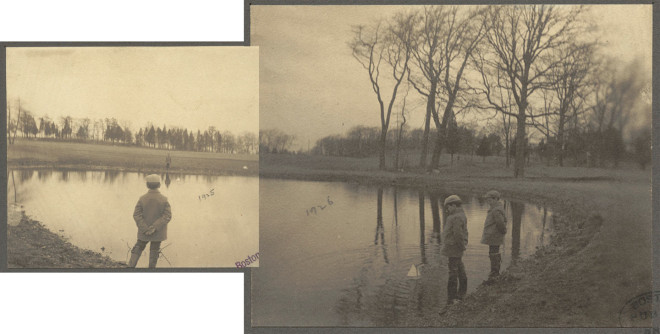 Looking closer at the maps, I found something interesting. The 1914 map of the Park does show a pond in the Sargent’s Field section of the Zoo! It’s not on any of the other available maps, only 1914, but there is definitely a body of water in Sargent’s Field that probably would have been known as Sargent’s Pond.

The two images above show some boys playing with boats on a pond. The caption from the Boston Public Library’s Flickr stream says this photo is from “Boston, Massachusetts. Franklin Park, 1900. Sargent’s Pond, now filled up”.

I can’t confirm or deny that the 2 photos above are from Nazingdale or Sargent’s Field. To my eye they appear to be from the Park, not the Zoo, but there are no landmarks in the photos to give any indication either way. What’s interesting here is the confirmation of a pond inside the Zoo near the Follies — although how long it was there is still a question. 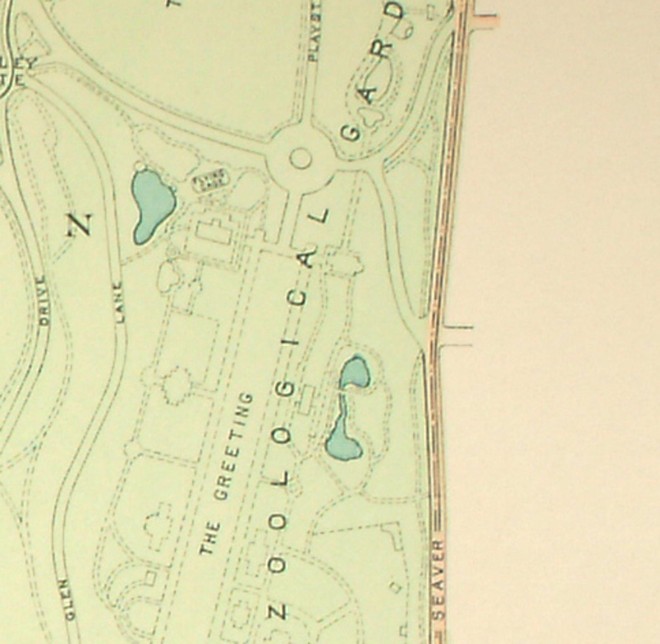