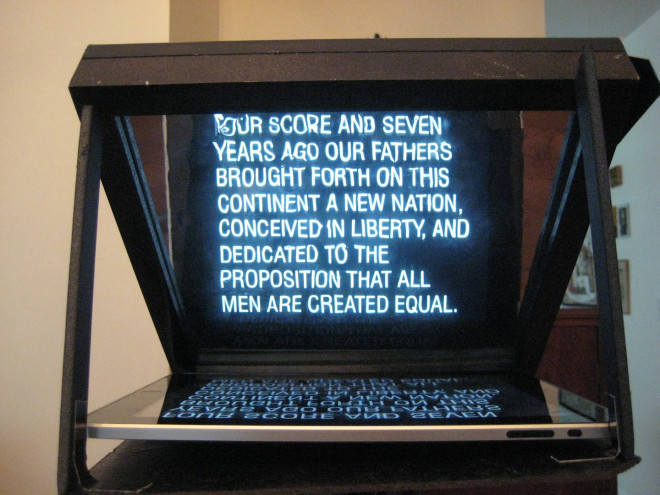 Recently I shot a short video which involved about 20 interviews. I do a lot of interviews for my work, and I’m consistently frustrated by the fact that people never look at the camera. Now, I know that most people are intimidated by cameras, but as a filmmaker it is necessary that they address “the viewer” not the guy behind the machine, and I’ve tried a lot of different ways to make them look at the lens and not me. I use tape. I hide behind walls. I try to disappear. None of it works all that well.

Morris used this technique to great effect in The Fog Of War, in which Robert MacNamara does a sort of on-camera unravelling under Morris’ scrutiny.

I’ve looked into buying a teleprompter, but they are prohibitively expensive. The cheapest use an iPad as the source of the text/image, and those run about $200. Full systems are in the thousands.

To me, this is ridiculous, since a teleprompter is really just a bit of mirrored glass, a frame to hold it at an angle, and an image source — like my iPad. Poking around online, I found some ideas and decided to make my own teleprompter. It cost me under $40, and I mostly used junk I found in my basement. Here’s how I did it. Feel free to use this as a guide, or innovate on this scheme if you need. 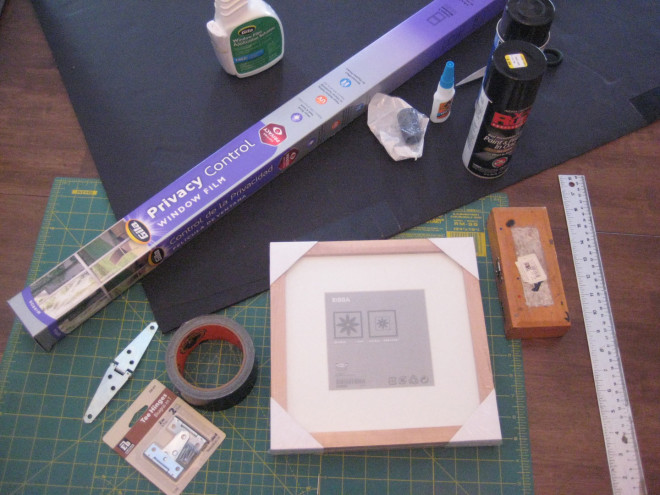 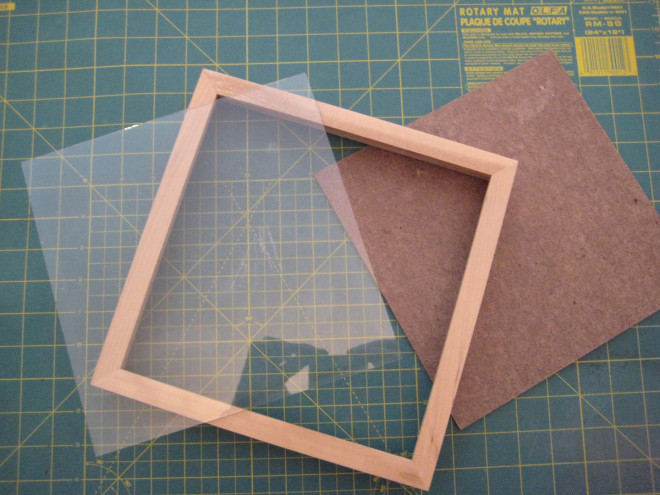 Step 1: I opened the IKEA frame and set aside the glass. I kept the frame, the matte, and the pressboard backing. 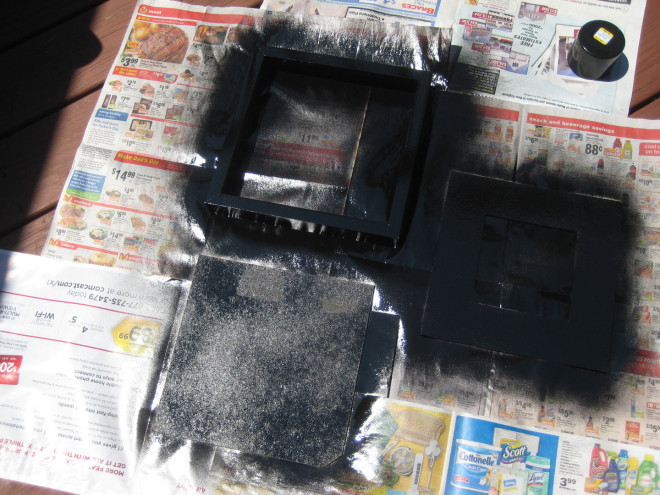 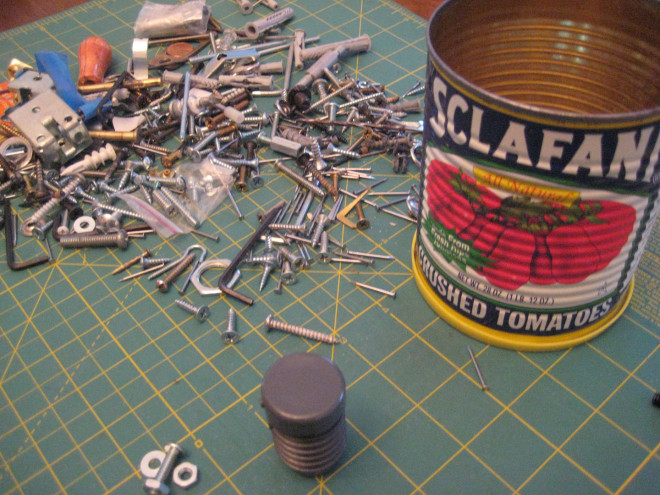 Step 3: I looked through my “can of homeless hardware” for some bolts and screws. 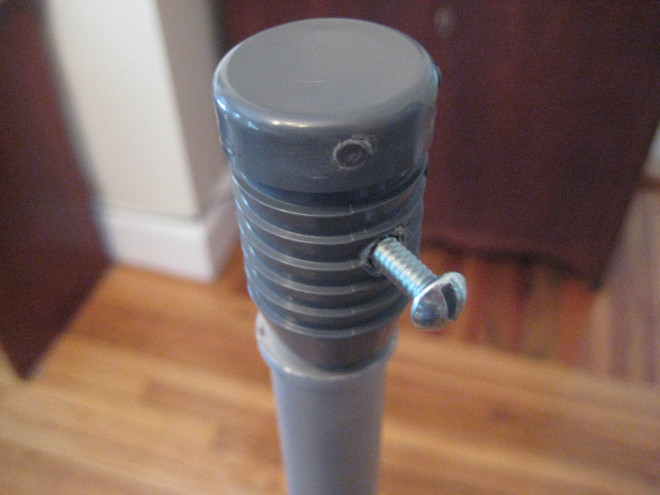 Step 4: While the frame pieces were drying, I took the 1″ plastic plug and drilled a hole in the side. This unit will attach the teleprompter to a light stand. 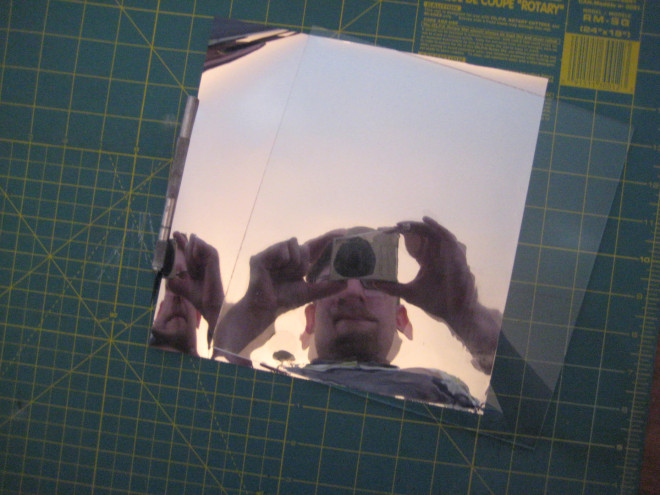 Step 5: Using the glass from the picture frame as my template, I cut a piece of the mirrored privacy tinting to fit the frame exactly. An X-Acto knife is good here. 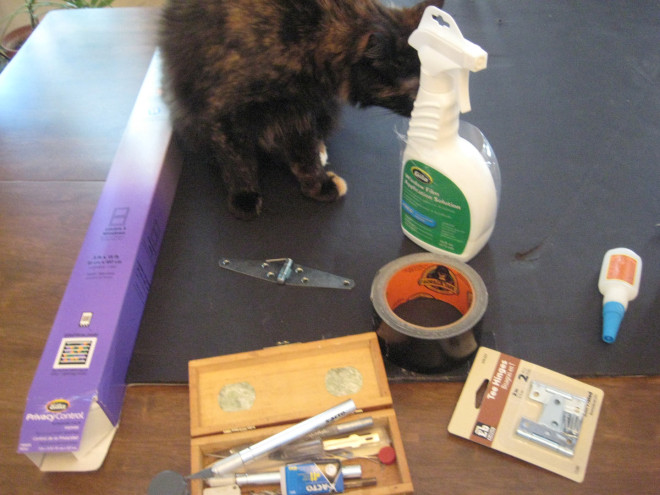 Step 6: Wait while the kitten investigates what is going on. 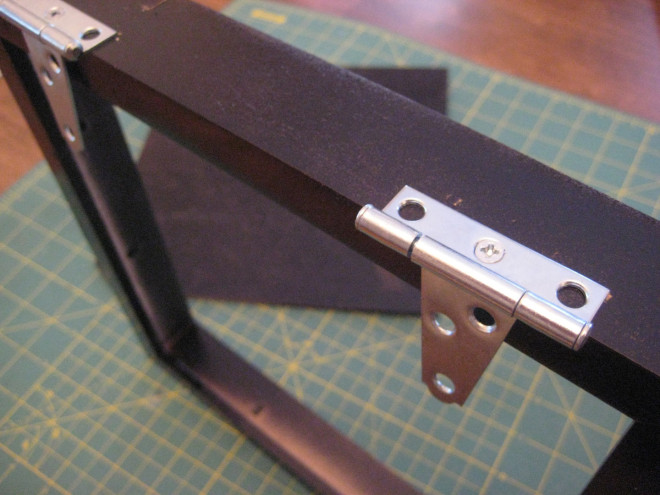 Step 7: Here I screwed the small hinges to the picture frame. The hinge itself is outside the frame, and I only used one screw so I could adjust the hinges to each other when I attach the other side. 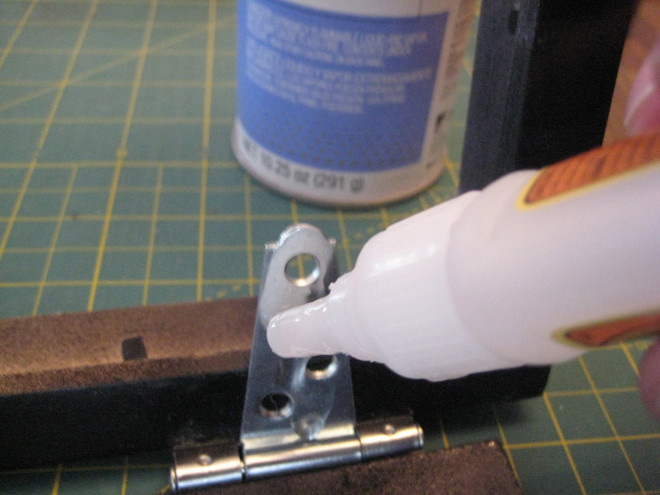 Step 8: Apply Gorilla glue (or any other super glue) to the hinge. This will attach to the piece of press-board that was the backing of the picture frame, and that is now the base of the teleprompter. 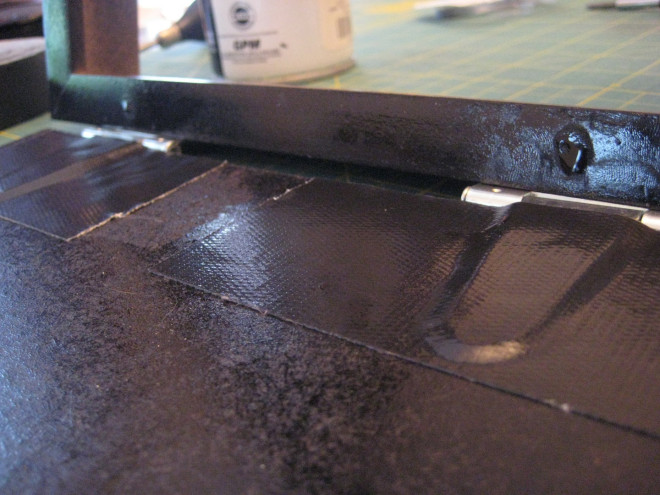 Step 9: I used Gorilla tape to hold the hinges flat while drying. No, this was not in my list of ingredients. Sue me. 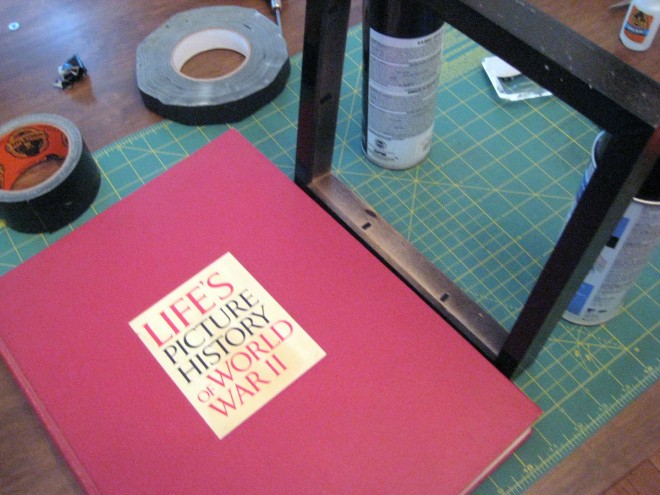 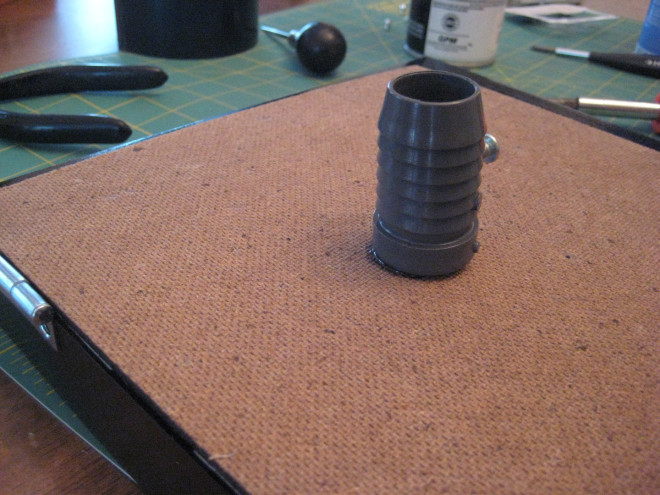 Step 11: Once the glue has dried on the hinges, I mounted the plastic plug piece to the bottom of the press-board. I used a single screw and some Gorilla glue. Later I reinforced it with some tape and a metal L-bracket — this is because the pressboard was too flimsy for the screw to take the full weight of the frame and glass. 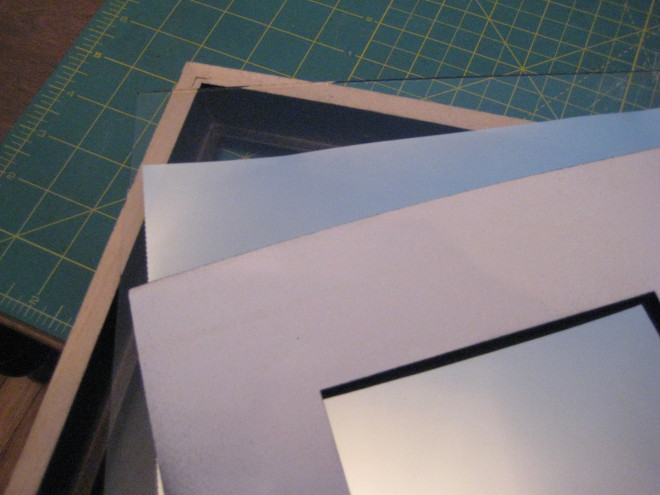 Step 12: It was time to put the frame back together. In this order, I put in the glass, the mirror film, the 2nd piece of glass from another IKEA frame, and then the matte.

Step 13: It took some time to find the right angle. Here I’ve cut two pieces of foam core for legs. I’ll probably replace these later with something sturdier. 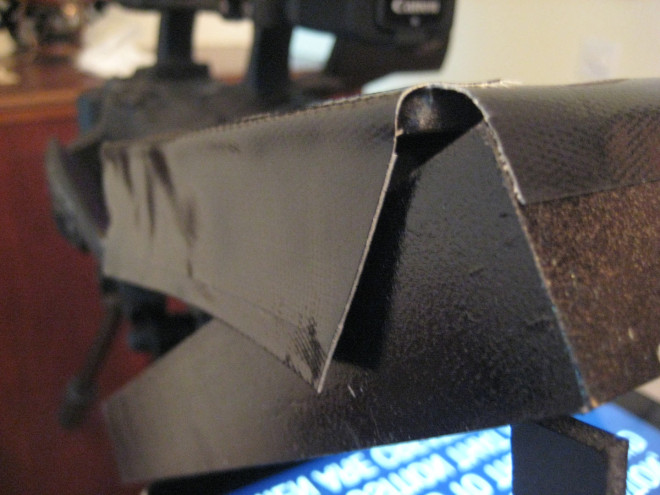 Step 14: Some foam core and tape to block out all the ambient light. The camera won’t be able to see through the mirror film if there is light reflecting from it. 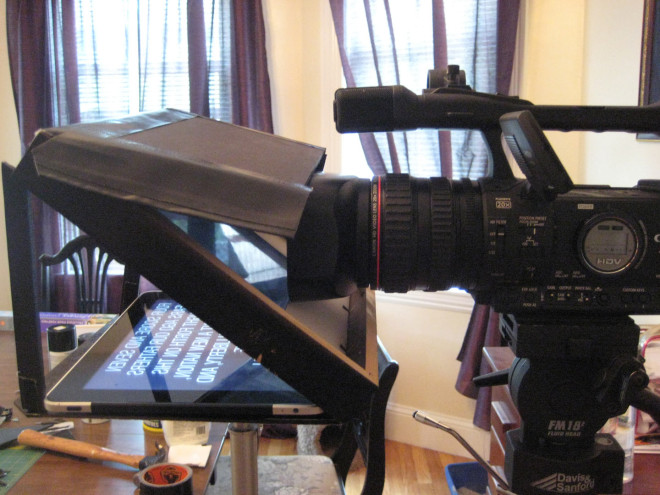 So this was my first attempt. It works really well and is very stable on the light stand. I found that I needed to change my exposures by about 2 stops, so more light will be required for good exposures, but overall it is a very simple and efficient box. When I use it for projects I’ll probably throw a black cloth over the whole unit to block even more light.

So there you have it. A box frame from IKEA, some privacy film from Home Depot and a few hinges and tape — and now I have a teleprompter. A good use of a Wednesday, in my opinion.