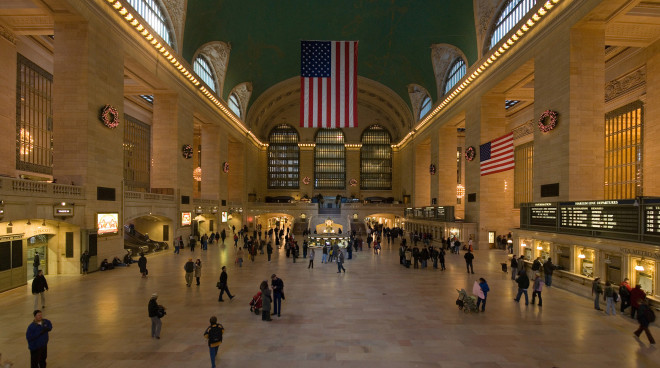 I’ve never had much cause to hang out in New York’s Grand Central Terminal. Arriving from Boston (or, for a time, Chicago) by train I end up in Penn Station; by bus at Port Authority. My infrequent LIRR trips to visit my grandparents departed from Grand Central, but I was a poor college kid and never would have thought to explore the Oyster Bar in the basement.

Which is a shame, because it is some of the best cheap eats I’ve had in New York and, tickling my sense of un-ironic nostalgia, one of the coolest.

Killing time this past Friday, waiting for my friend Jason to get out of work, I decided to walk from Penn Station up to Times Square and then across to Grand Central. The F train was nearby and, well… I’m a nerd and old buildings with lots of history are far more appealing to me than killing time in a Chipotle. So I made my way across the amazing open platform on the main level, gawking like a tourist at the artwork, the famous clock, and the balcony.

Then I got hungry. 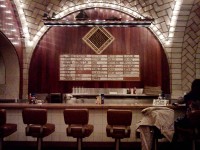 The menu at Oyster Bar in Grand Central.

Following signs to the dining level, I found myself in a narrow arched stairwell by a set of glass doors to an oyster bar. Raw oysters and clams are about my favorite food on Earth, and since there wasn’t a competing restaurant offering free bacon and beer I pushed my way in. My immediate impressions were of: low, arched ceilings; an open cafeteria-style place that should have been dark but wasn’t; a bar with lunch-counter seats and a long menu of fresh oysters; an arched door to a saloon.

Since I was there relatively early – about 4 o’clock – I was directed to the saloon. Here I found dark wood, moodier lighting, a vintage bar and friendly bartenders. I chose the raw cherrystone clams and  a Brooklyn lager.1

Why bother writing about this? Well, as the handful of posts on this blog demonstrate, I love to find the intersection of history and the present moment. I often think that the old is most interesting when it is paired with, and tempered by, the new. So the Oyster Bar in Grand Central is a living and breathing example of the kind of world people lived in a century ago, but also of how we can continue to carry on that idea of a 19th century lifestyle today. Not that I want to wear a stovepipe hat or debate the merits of the ongoing Reconstruction of the South (which ended in 1877, Grand Central opened in 1871), but I don’t object to being reminded that my world – with wi-fi on the Acela and unending text messages – can be shut off. In the basement of Grand Central I wasn’t wearing a frock coat, but I wasn’t checking my email either. I was eating good, simple raw food. I was reading a book. I was peaceful and happy and calm in the midst of the busiest city in the world. I was, briefly, outside of time. 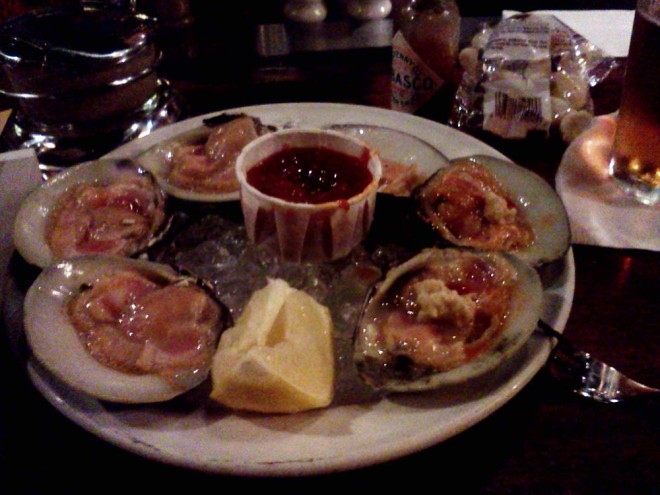 [1] Note: Yes I know that Cherrystones are clams and the title of this post says Oysters. But “Clams at Grand Central Station” doesn’t have the same ring, does it?