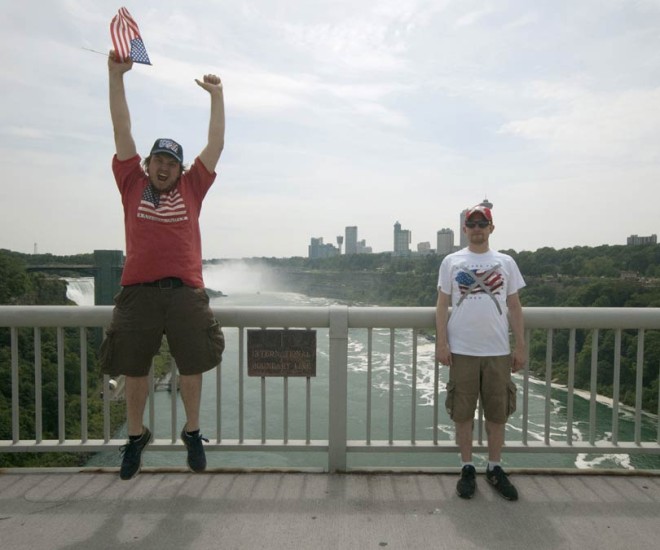 On the Rainbow Bridge, where the U.S. meets Canada.

Early in 2012, my creative partner Jason Dean and I were invited to be a part of a show at Gallery Kayafas in Boston on the theme of “patriotism.” Since we love Arlette Kayafas, and the 2012 election season was getting heated, we decided to make something new and challenging. 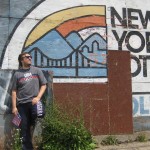 For the last 5 or 6 years our work has been very site-specific, invoking the history and identity of a site through interventions and public performances. In 2009 we did fourteen actions along 14th Street in NYC, and in 2010 we staged a week-long intervention on the Williamsburg Bridge. We have taken over ATMs, stages, parks and even the airwaves.

Considering “patriotism” we started talking about what that meant for us. American flags and politics came up a lot, as did frustration with government, and what it means to be “foreign.” The more we talked, the idea of what it meant to be a patriot — to love one’s country — became interesting as we considered what that meant in relation to site and location. Patriotism requires several conditions: 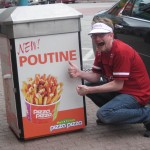 The second condition may seem a bit odd, but is justified by language. While it is easy to think of the U.S. Secretary of State as a patriot at all times, when she is in Japan she is, in fact, an expatriate. Sure, it’s a temporary condition, but it is also the proper term for her patriotic condition.

With this in mind, we decided to have some fun with the confusing state of patriotism by going to the U.S./Canada border at Niagara Falls. We met there (Jason flew in from NYC, I drove from Boston) and spent a 2 days considering our patriotism. Jason brought with him two letters in sealed envelopes. One said “Congratulations you are a patriot!” and the other said “I’m sorry!” We selected these at random and opened them. Jason got to be a patriot, I was exiled.

Our plan was do open these at the center of the Rainbow Bridge, next to the marker showing where the U.S. and Canada meet. However, since the bridge is between security checkpoints, we decided to open them in the hotel. C’est la vie. 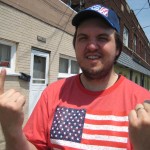 After choosing our roles, we set out to use the streets (and Google Maps) to spell out our patriotic condition. Jason went first, as his project was much longer, and we started tracing the word “patriot” on the gridded streets of Niagara Falls, NY. Our plan was to park and walk, moving the car occasionally, but we ended up doing a kind of driving walk, with me following Jason in the car and shooting pictures out the window. One could argue that this was for convenience or practicality, but the truth is: Niagara Falls on the U.S. side is really, really, really scary. I mean burnt-out Mad Max scary. Even in daylight we didn’t feel comfortable stopping for very long.

Once we spelled out “patriot” on the U.S. side we crossed the bridge, taking our crossing photo that is the defining image of the project, and then went into Canada. 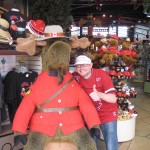 Now, on a hot and sunny day in June, walking all that distance left us tired. So we drank some beer (Canadian, of course) in our hotel and crashed. The next day I set out to mark my “X” on the Canadian side. Moving from the Rainbow Bridge into the city, I found a wholly different version of Niagara Falls. While the U.S. side was, um what’s the polite term…. horrifying, I guess… Canada was touristy and full of entertainment. It reminded me of Gatlinburg, TN for some reason, a mishmash of chain restaurants and tourist-traps along the main streets, and local restaurants jammed onto the side roads hoping for business. It was another kind of horrifying, since I have never eaten at a Tim Horton’s and don’t plan to, but at least I didn’t have to worry about being stabbed. 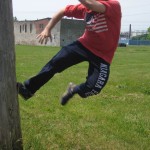 “Patriot X” is a really interesting project for me, looking back on it. While simple, all we did was walk and take pictures, it is fundamentally about tracing one’s identity on the landscape. I think of my friend Bruce Myren who is photographing every intersection of the 40th parallel on the continental U.S. and feel a kinship; by putting boots on the ground we claimed ownership over the space of Niagara Falls, even if only for 2 days. By designating our roles and relationship to the ground as contingent on our roles as patriots, we made existential marks that attest to the meaning of boundaries. We crossed an arbitrary line, set hundreds of years ago by a king and a war and a treaty, and in that act we lived two separate identities: the patriot and the expatriate.

Read more about “Patriot X” and watch the video here.