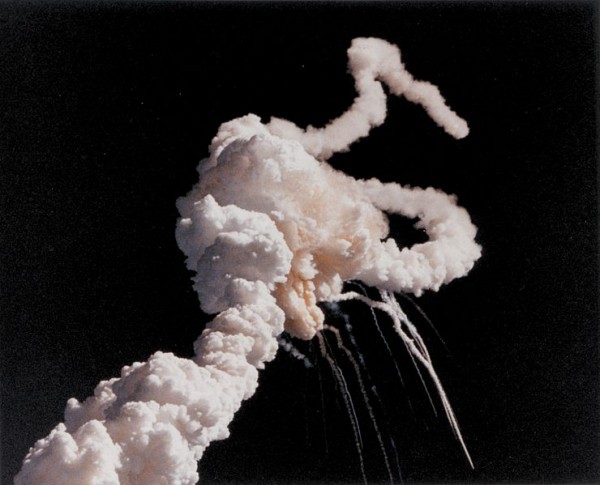 In January of 1986 I was 9 years old and in the 4th grade. Each day our teacher gave a 10-question spelling test, and the student who got the top score was allowed to stay in the classroom during lunch (rather than eating in the cafeteria) with a friend. The class TV was tuned to a game show, and after eating we could play games on the Apple IIe computer.

On January 28th, 27 years ago today, I was the student who got the highest score on the test. My friend Billy and I were in the classroom alone, playing “The Oregon Trail” and watching “The Price Is Right.” On the desk nearby were two empty orange plastic trays, the kind with separate compartments, smeared with remnants of… I can’t really remember but probably tater tots and early-80s lunchroom horrors.

A few minutes into our lunch the game show cut away to news of the shuttle explosion. My friend and I sat there, stunned and sad. We were unsure what to do, and eventually one of us (Billy I think) ran to the cafeteria and got a teacher. Our fellow students came back into the room and I remember spending the rest of the day watching the news over and over, the horrible footage of the explosion repeated on every channel.  Of course we mourned Christa McAuliffe and looked to our own teacher differently after that day.

That day stands out for me for two specific reasons.

The first is that my friend Billy and I lived on the same street. To set the scene: this was rural farm town in western New York, where every neighborhood was framed by orchards and open expanses of land. It was innocent, behind-the-times, and very conservative — a Reagan part of Cuomo’s New York. We lived on the opposite end of the street from each other — about 1/4 mile apart — and rode our bikes back and forth together every day. Our trips were punctuated with a stop in the only part of the street without houses, a small wooded area, where we would talk “seriously.” At the time, tensions between the U.S. and Libya were rising, and the Cold War was in the news every day. Even at age 10 we were both worried about nuclear bombs falling from the sky. We knew enough about our world to know there was a power plant nearby that might be a target, and we both believed Reagan would press the “red button” soon.

This was the world of my childhood. We expected, and even planned for, nuclear holocaust. So sitting together in that room, just the two of us playing “The Oregon Trail,” Billy and I saw the Challenger explosion in apocalyptic terms.

The second reason that January 28, 1986 stands out for me is… well, it’s one of those moments when family history and national history collide. That week, my parents were in San Diego on a trip. My sister and I were in the care of my grandmother Avis, a woman that I could not describe in 10 blog posts. The short version: blue-haired, chain-smoking mother-of-5-boys from Long Island. For our purposes, the most important fact is that she was married to my grandfather, an engineer at Northrop-Grumman.

When we got home, full of stories about The Challenger and what we had seen on TV all day, she sat us down and told us a story. On April 11, 1970, the moon mission Apollo 13 suffered an explosion. Our grandpa Bob was one of many engineers that had worked on the mission, and was called in to figure out how to solve the many crises that were emerging. She told us about the bravery of the astronauts, and also of the people on the ground. She told us about how important the work was, and that even a failure was not enough to stop progress. Even a gigantic explosion on TV was not going to stop these people, they believed in what they were doing.

That seemed to me exhilarating but also terrifying. Somehow, even then, I knew that the Space Shuttle I loved and the nuclear missiles I feared were somehow connected.

Looking back 27 years, I can’t believe how much the world has changed since the Challenger disaster. The Cold War race to the top (in science and technology) and to the bottom (in war-making and violence) is a distant memory. I really think that the Challenger explosion is a defining moment for my generation — like the JFK, RFK and MLK assassinations were for a previous generation — one that fits into the Cold War narrative of fear, failure and confusion that we grew up with. It was the first time that I, and many of my friends, really faced death. Not just the deaths of Christa McAuliffe and the other astronauts, but the death of our dream of a utopian future. A kid that wants to grow up and be an astronaut does not watch the Challenger explode and want to be an astronaut anymore, at least not without reservation. In a Cold War world where death hung heavy in the sky, and 10-year-olds plan for how to survive a nuclear holocaust… without the dream of space and all the hopes for the future that contains… 73 seconds can change a lot.