For any of this to make sense, I need to begin with three generalizations about the Baby Boom generation: they are the largest generational cohort in history1; they were raised in post-war consumer culture, and view most of life in consumerist terms; they are incredibly nostalgic. The first of these is a verifiable fact, and the latter two have been extensively studied by marketers, tracking the consuming trends of Boomers as they age.

For example, in the 1997 book Rocking The Ages: The Yankelovich Report on Generational Marketing the authors write about Boomers:2

Nostalgia is a strong Boomer hook. Their best moments were yesterday, when both they and their future were being heralded and celebrated. That’s why you hear the rough, deep-throated voice of the late Janis Joplin pitching Mercedes-Benz, or why you hear well-chosen refrains from disco hits of the seventies being used as the soundtrack behind full-screen beauty shots of Burger King sandwiches.

[...] There is a new yearning and nostalgia for traditional values among Boomers – the desire to re-create the carefree world in which they grew up, a time where life seemed simpler, more straightforward.

I was born in 1976, I am not a Baby Boomer. Yet, in middle school in the late-eighties I became caught up in a Boomer nostalgia moment that influenced me in many ways. Oddly, it wasn’t until recently that I started thinking about the intensity of the nostalgia cannibalism at work in my enjoyment of some great comic books.

A very beat up copy of MAD #1. Collection of the author.

Nostalgia cannibalism is a term I’ve made up because it makes sense to me as a way of describing how a cultural desire to re-live a past moment, especially one that is more innocent and quaint, can be re-purposed by consumer culture on a predictable cycle. There are many examples that one could give for this: the re-issue (and re-re-issue ad infinitum) of albums by The Beatles, Bob Dylan, Jimi Hendrix, and the whole Woodstock culture. For me, one of the great and fascinating examples is E.C. Comics.

There are many great histories of E.C. out there, but my point-of-entry was The MAD World of William M. Gaines by Frank Jacobs. I got my copy in sixth grade and read it repeatedly – at the time I was infatuated with MAD Magazine, that “obscene” boyhood magazine that made parents roll their eyes. Of course, being me, I couldn’t stop at enjoying the magazines and needed to collect as many as I could, and read every bit of history I could find. It wasn’t long before I came upon the story of E.C. What I didn’t realize was that I was also unwittingly participating in a huge second wave of nostalgia cannibalism.

But I’m getting ahead of myself.

Before the New Trend horror comics, E.C. published comics like this “Picture Stories From The Bible” from 1944. Collection of the author.

For those who aren’t familiar with E.C. Comics, I’ll offer a short introduction. Founded by Max Gaines, who was a pioneer in early comics, the company had fallen on hard times by the late-forties, and was barely surviving by publishing books like Modern Love and Picture Stories From The Bible when Max Gaines suddenly died. His son, Bill, took over despite having no interest in the business. By 1950 he had launched a “new trend” in comics with editors Harvey Kurtzman and Al Feldstein, an era that lasted five years and included such legendary titles as Tales From The Crypt, Weird Science, Two-Fisted Tales and, in 1952, MAD.

Unlike their competitors, who produced comics in a “factory” process with little individual style allowed to artists, E.C. encouraged their illustrators to develop their own styles and even to sign their work, a very rare thing in 1950s comics. They even sought out unique talent and highlighted them in mini-bios in the comics, and in this way launched the careers of many of the greatest illustrators in comics history: Jack Davis, Wally Wood, Frank Frazetta, Bernie Krigstein, “Ghastly” Graham Ingels, Joe Orlando, Johnny Craig, John Severin, Will Elder and many, many others. Of course, Feldstein and Kurtzman were front-and-center on most issues, and their rivalry is a notorious part of comics lore. In 1955, after the publication of the Dr. Fredric Wertham’s Seduction of the Innocent and the testimony of Gaines at the Senate Subcommittee on Juvenile Delinquency, the industry implemented the Comics Code which effectively wiped out the entire E.C. line, except for MAD.3

This bit of comic book history might have been lost, or at least exiled to the outer realms of comic geekdom, except for the very important fact of timing. E.C. Comics rose and fell between 1950 to 1955, the absolute core of the Baby Boom childhood. A boy4 born in the immediate post-war boom would have been 5 years old in 1950, 10 in 1955. While their younger siblings might have missed buying them in stores, they would have found the comics in their brother’s toys and read them with delight.

This is where Baby Boom nostalgia and my concept of nostalgia cannibalism come together. As those kids grew up, they turned their thoughts backward to the “simpler times” of their childhood. This isn’t surprising given that the oldest of the Boomers were being sent off to fight in Vietnam by 1965, and the underground counterculture was becoming mainstreamed by the “Summer of Love” in ’67. The anti-war counterculture was made of Boomers who celebrated figures like R. Crumb, whose comics defined their generation – and Crumb had been nurtured by underground hero and E.C. editor Harvey Kurtzman. So it’s not surprising that as the Boomers looked back, they saw the fun and quaint comics of their childhood as great nostalgia that provided an escape from the very adult problems of the Vietnam era. 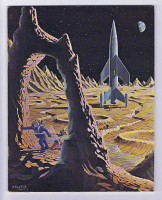 “Squa Tront” #3. Collection of the author.

It was in 1967 that the first attempt to revive the E.C. legacy hit print. A college kid named Jerry Weist published a fanzine called Squa Tront that featured interviews with E.C. artists, stories and history and insider information that only fans of the comics could love. Interestingly, Squa Tront #1 was quite popular and a reprinted, leading to follow-up issues appearing sporadically over the years – Fantagraphics released #13 in 2012.

Squa Tront was really just the leading edge of what would become a full-blown E.C. revival in the early-1970s. East Coast Comics released a set of re-prints of classic E.C. titles in 1972-3, which were quite popular despite their cover price of $1 – outrageous for a comic in 1973. Yet the Boomer nostalgia for better days, along with their consumerist philosophy, sold many books.

Watch the full 1972 film “Tales From The Crypt” on YouTube

Now, a few fanzines and the reprinting of some comics does not necessarily indicate a mainstream nostalgia for the E.C. days. So what, you might ask, is the sign that this is a form of nostalgia cannibalism? The answer: movies.

In 1972, British director Freddie Francis adapted five E.C. horror stories for the film Tales From The Crypt. Personally, I find the movie to be pretty interesting – it’s well-shot and the tone is right – but the acting is terrible. The film begins with five people arriving at a strange and scary building, where they are taken to a crypt and their stories are introduced by a hooded, monk-like crypt keeper. Each person reveals their story, and at the end the crypt keeper announces that they are all dead and must be sent to hell. Cue fire and screaming.

Watch the full 1973 film “The Vault of Horror” on YouTube.

In 1973, Francis released the sequel The Vault Of Horror with a similar setup and connection between the five stories. Probably the most notable thing about this sequel is the fifth story Drawn & Quartered which stars Tom Baker, best known as the Fourth Doctor.

What I find so interesting here is that, even as they were living the moments that would become the defining history of the Baby Boom – Woodstock, the anti-Vietnam movement, Women’s Lib, Civil Rights – they were already buying into a nostalgic version of their own childhood. In the midst of all the late-sixties and early-seventies cultural moments, Boomers were also actively consuming nostalgic elements of their childhood.

[1] …followed closely by their “echo” during their peak child-bearing years, but this “echo” is staggered and not quite as tightly associated in age as the original Baby Boom

[3] Starting with issue #24 in 1955, “MAD” changed from the comic book format to the magazine format most people know today. This was done to fully escape the Comics Code, but also because the magazine industry was much more difficult to censor as it was not seen as exclusively the realm of children. Any attempt to censor magazines would necessarily require censoring the wildly popular “Playboy.”

[4] Let’s be honest here, these were comics for boys.