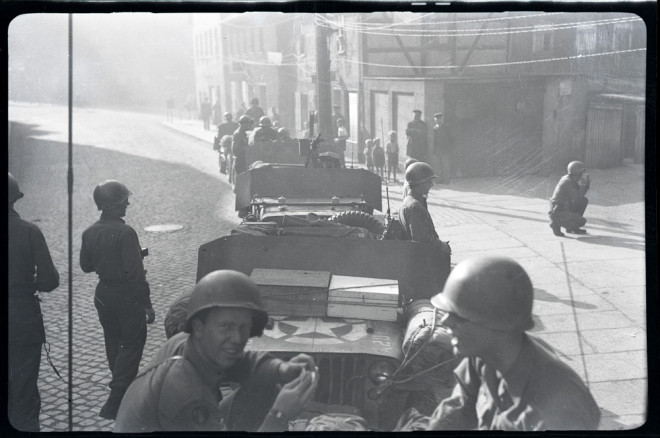 Ralph Rush, a veteran of WWII and liberator of Ohrdruf Concentration Camp, describes his experiences in “16 Photographs At Ohrdruf”

One of the most memorable parts of filming “16 Photographs At Ohrdruf” was my trip to Seattle to meet Ralph Rush. When he invited me to stay with him on a small island at the northern tip of the Olympic Peninsula, I was excited to meet a veteran of the 89th Division and liberator of Ohrdruf concentration camp and very interested in hearing his story. When he mentioned that he had a commercial oyster bed, there was no way I could say no.

Ralph and I have kept up a decent correspondance, and this past week he wrote to ask about some photos I included in my film. They show some Army Jeeps in WWII with armor plating over their windshields, which he claims were unique to his platoon. While I’m not sure this is true, I do know the images in question do show the Intelligence & Reconnaissance (I&R) Platoon of HQ Company, 355th Regiment, 89th Infantry Division. I also know that there is little dispute that they was scouting in advance of the 4th Armored Division and uncovered the Ohrdruf Concentration Camp (KZ Siii Ohrdruf-Nord) on April 4, 1945. In fact, it was precisely for this reason that I travelled across the continent to meet Ralph: he was in those Jeeps on April 4, and one of the first to see Ohrdruf – the first camp uncovered by American soldiers. 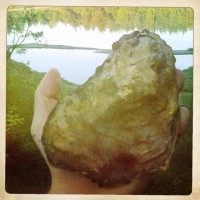 An oyster the size of my hand, and the gorgeous view from Ralph’s deck.

In our recent correspondance, Ralph asked me to send him copies of the pictures because he didn’t have any. I was confused, because I got the images from him and had returned all the materials soon after our interview. Yet, yesterday as I looked at my digital files, I realized that he had also given me photographic negatives for which he had no prints, and I had scanned them. So I had pictures that Ralph did not!

Once we got that sorted out, Ralph responded with a story from his war days about one of his experiences. After years of researching WWII I’m still amazed at what these guys survived and how they persevered. It is shocking how depraved, violent and evil the world was during that period, and while parts of it remain as violent, I still can’t believe there was a time when millions and millions of people could, on a daily basis, expect to live some version of the story Ralph tells. Of course, the story he tells in “16 Photographs At Ohrdruf” is much, much more horrifying. Yet, as you read his recollections, remember there was a time when we asked a half-million Americans to die in the largest war in history. Add to that 6 million Jews, 20 million Russians, countless Japanese, German, Chinese and…. you get the point. That these men and women survived WWII is amazing to me; that they rebuilt the world economy and created the relatively-peaceful prosperity of the Cold War is even more so.

So, here is Ralph’s story of the Nazi airplane. I’ve edited it a bit for formatting.

The photo of Ralph’s platoon just after the attack of the German plane.

WOW – I thought that I was missing some pictures I had taken – the 2nd picture has an interesting story. We, the Platoon, had  a mean night and we were very tired – the sun was shining high on this hill and and we laid down to get some rest – when BANG! –  a low flying German airplane began to strafe us with his 20mm guns. We had no cover. We started shooting at him with  EVERYTHING we had, but he was moving TOO fast! He strafed us twice and started on his third run – we were in deep trouble!!! As he turned to make his next run an American P-51 dropped out of the sky and engaged him. What a Fight!!  WOW what action – went on for 45 minutes or more!

Thank GOD the American shot the German down and we saw his plane hit the ground and explode on our side of the Rhine River – some 20 or so miles East of us, our next objective.

Wow, what a relief – no one was badly injured and the jeeps where OK. Damn we were LUCKY.

I had two drivers during combat- – both are alive today-  one is 95 and one 98 and I will be 91 this Feb. We were the 89th Div HdQts Co lead recon Jeep for the entire time we where in combat. (No one ever offered to take our place) All three of us returned home with only a few nicks. We all agree: WE ARE THE THRE LUCKIEST MEN IN THE WORLD!!