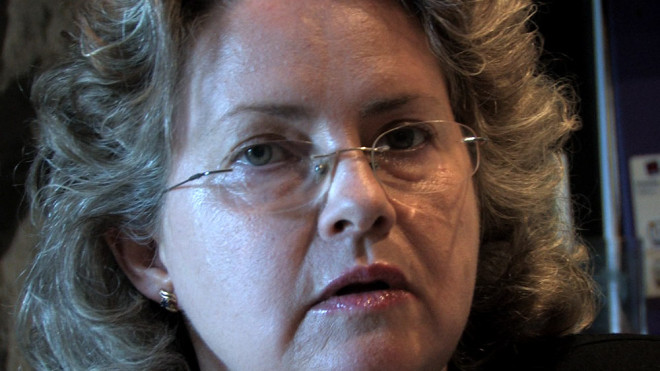 Anna Rosmus, still image from “16 Photographs at Ohrdruf” from an interview in the summer of 2011.

There came a point in researching 16 Photographs at Ohrdruf when it was impossible not to interview Anna Rosmus. Which is to say that as I talked with more and more veterans, especially the men of the 65th Division, every conversation led back to Anna and her work. If I asked about photos of the Division, it seemed like every answer was: “Talk to Anna. I gave her my pictures years ago.” When I wanted to look into what happened to the Division during Occupation after the war, everyone sent me to Anna. “This picture of your grandfather has the IX Corps patch. That’s Occupation. Talk to Anna.”

Now, you can be forgiven if you didn’t immediately recognize Anna’s name. I didn’t put together the short-lived and sensational story from my youth with the person I was to meet, and only after typing her name into Wikipedia was I reminded why Anna Rosmus is such a key figure to the discussion of Holocaust history.

OK, if you’re still going “huh?” then let me explain. Anna was born in 1960 in Passau, Germany. In college, she was invited to write for a nation-wide essay contest that led her to research the history of her town. Once she started revealing the Nazi history of Passau, and the Holocaust atrocities committed within sight (and smell) of the city… well, let’s just say people didn’t respond kindly. Check out these 60 Minutes profiles from 1994, 2000 and 2011 to get an idea of her impact.

As but one example, I have a good friend who grew up near Passau and is about my age — born in the mid-1970s. When I mentioned, over beers, that I was going to interview Anna Rosmus he grew first agitated, then amused, and told me how much she is still an outcast in Bavaria.

The cover of Rosmus’ “Valhalla Finale”

Digging deeper into my grandfather’s division, the 65th, I found Anna everywhere. Here she is taking veterans to battle sites, installing monuments to their service, meeting with mayors and leaders. Her most recent book of photographs and veteran histories, Valhalla Finale, is full of amazing and detailed historical information about the movements of the U.S. troops that would eventually occupy Bavaria.

Once 16 Photographs at Ohrdruf is released I’ll post some excerpts of my interview with Anna. We met at her home in Maryland and talked for several hours about her work, and she is one of the most generous and thoughtful people anyone could hope to meet. Perhaps the most interesting sections of our interview were her recollections of a lifelong friendship with General Stanley Reinhart, commander of the 65th Division who became the Military Governor of Upper Austria. Reinhart is someone that I want to research in much more detail, and the handful of letters and memos I’ve read from his WWII years indicate that he is a very interesting figure! Of course he and Anna were close friends, as it seems Anna and her work are never far from any research about the 1945 campaign.

In the meantime, someone has posted the full movie The Nasty Girl from 1990 on YouTube and I thought it would be a good introduction/extension of 16 Photographs at Ohrdruf to share this film. Enjoy!

Note: This film was posted to YouTube by another user and I’m only linking to it. I claim no ownership or copyright over the film.