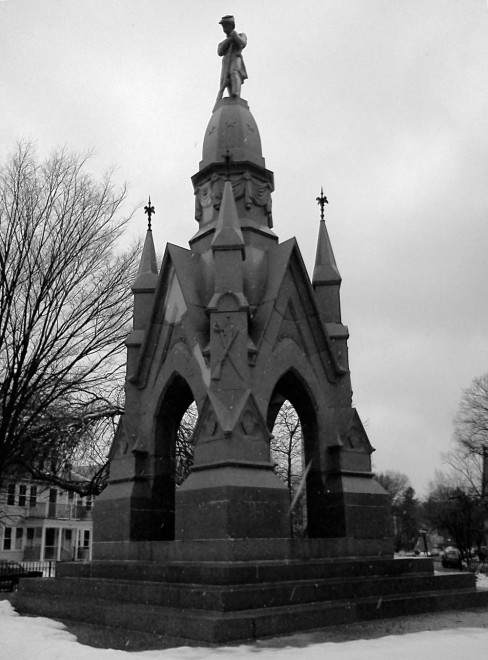 “The Monument” in Jamaica Plain, MA

Today I was walking in a light snow past The Monument near my home in Jamaica Plain, a neighborhood of Boston. I’m sure it has a formal name, but to everyone I know it is just The Monument. For years I’ve walked past it and looked at it as a glorification of the Union victory in the great War Between The States. Recently, however, I’ve come to see it differently. After a decade of wars in Afghanistan and Iraq, I see something very different.

I see a lot of sadness, and a profound sense of loss.

For many years I read about the Civil War and immersed myself in that history, but rarely did I think about what happened after the Confederate surrender in 1865. Sure, there was Reconstruction but that was a political problem (albeit fraught with terrible social problems in the South) and it ignored the families and veterans left behind. Yet more and more recently I’ve noticed that each New England town I pass through has a similar monument, and each has a plaque with the names of the men from that town who died.

The Civil War was the greatest human tragedy that had ever happened until that time. The amount of death and destruction that the country faced was unimaginable, and would not be equalled anywhere for a long time. In the aftermath, a whole generation of people were left to try to figure out how to mourn. So what I had always seen as monuments to victory were memorials to a tragedy, perhaps lightly covered with a patina of honor and heroism, but placed in the center of town because the gravestones were too far away. The amount of money and effort expended to place monuments on the battlefields at Gettysburg, Antietam and other sites shows how much people wanted to publicly honor the soldiers. People don’t go to such lengths unless driven by powerful emotions.

At the Vietnam Veterans Memorial. Click to view source.

Nationally, we honor our heroes and our history, but there is always some degree of mourning. Civil War memorials started appearing even during the war, and in 1863 Lincoln said these wonderful words at the dedication of the cemetery at Gettysburg:

[W]e can not dedicate, we can not consecrate, we can not hallow this ground. The brave men, living and dead, who struggled here, have consecrated it, far above our poor power to add or detract. The world will little note, nor long remember what we say here, but it can never forget what they did here. It is for us the living, rather, to be dedicated here to the unfinished work which they who fought here have thus far so nobly advanced. It is rather for us to be here dedicated to the great task remaining before us—that from these honored dead we take increased devotion to that cause for which they gave the last full measure of devotion [...]

Within a generation, hundreds and perhaps thousands of monuments appeared. The mourning was national, and the outlet for that grief was made public and permanent. I don’t doubt that many people hoped these monuments would remind the world of the enormity of this great tragedy in the hopes that it would never happen again. 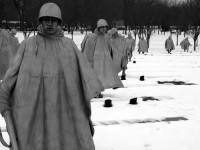 Today, when I think of other monuments to war, I consider them in the light of their role as an outlet for national sadness. The national Vietnam Veterans Memorial opened in 1982, less than a decade after the end of the war. Like Civil War memorials, this wall of names is clearly dedicated with a heavy heart and a deep sense of national tragedy. In contrast, the nearby Korean War Veterans Memorial didn’t open until 1995, over 40 years after the conclusion of that conflict. The delay is strangely fitting for what veterans have called “The Forgotten War.”

The two great World Wars have a conflicted and bitter history with the National Mall. A monument to the soldiers, sailors, marines and airmen of World War II was not opened until 2002. It memorializes battles and theatres of war, but seems deliberately trying to avoid names of individuals, in sharp contrast to the Vietnam Memorial. While World War II remains the greatest human tragedy of all time, including over half-a-million American deaths, contemporary memory of that war is colored more by the ultimate victory than the great catastrophe of 1939-45. The horrible crime of the Holocaust has become the tragedy of World War II, the event we rightly memorialize. But considering the experiences of victory and tragedy have become separate things, which is so unlike the way people chose to remember the Civil War.

Of course, the current fight for a national memorial centers on the U.S. role in World War I. It’s too late for any veteran of that war to see the monument, but it seems important to remember them, and to honor the families who lost husbands and fathers and brothers in the mud of France in 1918.

I have always been, and steadfastly remain, opposed to war. War is the failure of human compromise, the loss of empathy, the dehumanization of the individual and the end of any and all devotion to religion, faith and morals. For me, these monuments are an attempt to remind us of this… to shout and scream at the people who come after. The Monument near my house is trying to scream “Don’t do this! Don’t suffer like we did! Don’t let this happen again!” and it is a dishonor to the people who fought, and their families who memorialized them, that we ignore their message. The Monument that I walk by is not saying that war is great and that we should have more war; it is begging all of us to never do it again.

With some recent announcements, it is clear that President Obama is winding down the war in Afghanistan. In his first term he finally ended the war in Iraq. These are two of the longest wars in American history, and too little time has passed for us to know how they will be remembered. I wonder, though, how the coming years will shape their memory and how we memorialize them. Are they a great victory to be kept as a sterile fountain, like the WWII memorial? Or will they be remembered as a terrible and avoidable tragedy, marked with a heartbreaking monument like that which remembers the Vietnam War?